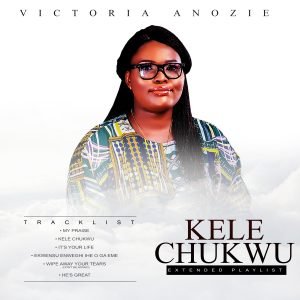 After taking a break for a while, the Nigerian Urban-Gospel singer, Victoria Anozie has released a new EP titled, KELE CHUKWU. Speaking on the new Extended Playlist, Chisom as she’s popularly called revealed why she release the project. She said, “The album was designed to ease everyone into a realm of zero anxiety after the turbulent period that the world has been through !”
Victoria is currently working on her debut album which consist some of the tracks in her newly released Kele Chukwu EP. She strongly believes her songs will bring about peace and healing and also impact lives through her ministrations. The EP is distributed and available across all digital stores globally like iTunes, Spotify, Deezer, Amazon, Google Music, TikTok, iHeartRadio, Shazam and many more. Click the links below to download the songs now

You can also stream the song live on the following channels:

DOWNLOAD MP3: WHEN I CALL By Nobleheart Michael (Audio + Lyrics)